Hanok is a term to describe korean traditional houses. korean architecture lends consideration to the positioning of the house in relation to its surroundings, with thought given to the land and seasons. houses differ according to region. in the cold northern regions of korea, houses are built in a closed square form to retain heat better. in the central regions, houses are ‘l’ shaped. 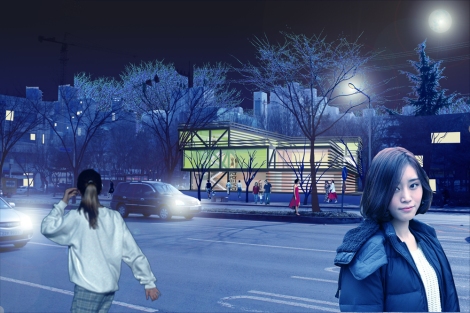 The pedestrian access to the library is projected trough the garden at the north of the site. in this part are most of the pedestrian flows, including the pedestrian crossing in the avenue. so the main entrance is located in front of the crossing point.

Most of the trees in the site have been preserved because are in the boundary of the site, around the library. the building projected is energetically efficient, using the upper roof for the solar panels, and the other roof lowers are garden roofs.

The library is projected like a big zoom apply to a bookshelf, making it enough big to enable the use as a building, so the library is a kind of  «small bookshelfs inside a big bookshelf».

The building is not a pure volume, it is broken into small volumes, some are pushing and other are pulling, getting a faceted façade, so that when you are close to the library you feel comfortable, and don’t have the impression of being near a big/massive building.

The skin of the building is protected as another “bookshelf”, in this case turned into a brisoleil, to prevent the library from receiving too many sun rays. the façades south and west are the most exposed to sun, then is this the place where there are more brisoleils.